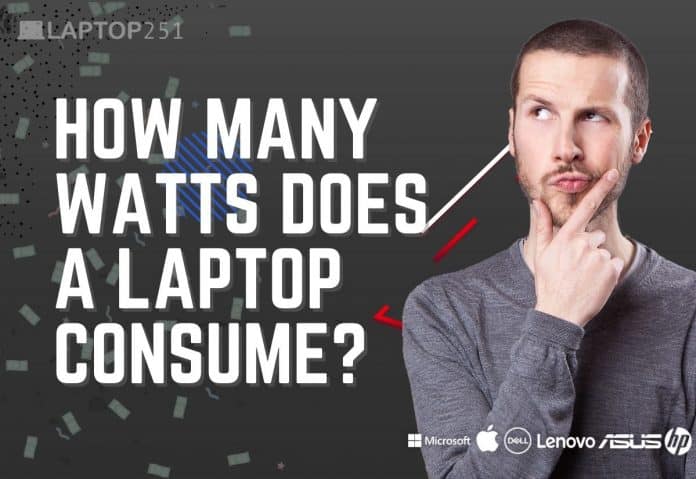 Laptop721 is supported by readers like you. When you buy through links on our site, we may earn a small commission at no additional cost to you. Learn more.

There are certain factors that most laptop users do not seem to be concerned about, or it isn’t something to be concerned about. If you are a curious person and have been trying to understand everything about the machine that you have been using for years or want to figure out the energy consumption of the one you are planning to get, we will help you with it.

If you’re just into the numbers, then the answer is very simple, a typical 15-inch laptop consumes approx 60 watts per hour. But then, this is not the exact amount it would consume. Energy consumption depends on tons of factors that you may not be aware of. Such as charging, screen brightness, running software, graphics card usage, etc., are some of the things that may alter the power consumption.

Energy Consumption in Laptops: The Factors

Before we move on to the factors on which it depends, you may want to consider multiple things. There are tons of brands manufacturing laptops every year. As we move towards better use of technology, companies have been trying to build up the better machine with the least power and still work as well as any laptop you have used.

One of the major factors that decide the energy consumption is the type of laptop you have been using. If you are using a very basic and general laptop, it will consume about 60 watts/hr energy. If it is a gaming laptop or any other high-end laptop, it will be much more than that. As tested in our labs, a few models can go a lot more than 100W per hour on average, which is why the laptop becomes very hot and needs a cooling pad to cool it down.

Similarly, if you are charging such laptops it increases even more.

It is pretty much understood that a laptop with a very low-grade CPU or processor uses uploads of power than any powerful CPU such as Intel i7 or Intel i9 would use. The reason behind it is as simple as it may seem. The processor that may not be good enough will need more power to provide your laptop with good enough performance, while a great CPU works great in the small amount of power it consumes.

HIGHER the performance of a graphics card, HIGHER is the power consumption. For instance, when playing a high-end game, the GPU in your laptop will provide better visuals. Most gaming laptops and workstations for tasks like machine learning and data science generally come with a high-end GPU such as RTX 2080, 2070, or 2060.

A laptop that comes with a high-end GPU is accompanied by a high-end CPU as well. In most cases, it also comes with a better-quality display too, and higher battery capacity, etc. Therefore, all of them together would consume higher power. We have a dedicated section in this post which talks about the power consumption in gaming laptops.

If you’re getting a budget 2 in 1 laptop or a budget model that comes with Integrated graphics, then it would consume fewer watts!

If your laptop came with a 60W adapter, then it’ll consume less than a laptop that comes with a 90W adapter because that’s the number of watts it’ll be spending when in use.

How Many Watts Does Gaming Laptop Use?

We have another important laptop category that needs special mention as everything related to gaming laptops is powerful and requires special assembling of components. Being a gamer, you can understand that to run some high-end games; the laptop needs to be at its level best.

Moreover, almost every gaming laptops are heavy and bulky since they have been equipped with the best of everything. From processors to having powerful batteries, gaming laptops have all of it.

To check the power consumption of a gaming laptop, you may want to check the charger that is charged with. One of the most favored gaming laptops, Acer Predator Helios 300, which we have mentioned in almost every laptop series as one of the best laptops, has a charger with 180W power. This means it consumes at least 180 Watts per hour.

How Many Watts Does an Apple MacBook Consume?

If you are a Macbook user, you must know that a typical 13 inches Macbook Pro consume 61 Watt power as provided in the charger, while that a 15 inches Macbook consumes 87 Watt/h.

Based on the above assumptions you can easily calculate the cost of the electricity which you may consume each day and over a week. Since a Macbook consumes on an average 61 Watt/h i.e. 0.061 kWh, and it works for around 10 hours a day, it will cost about 7.32 cents with a total of 51.24 cents in a week approximately (taking 12 cents/kWh cost of electricity).

Ways to consume Less Power on your Laptop

If you have already understood the level of power consumption by your laptop and are highly dissatisfied with the results, you may have to think of some ways to consume less power. We have tried out some ways for our laptops have come over several ways that you can try out as well.

There are multiple other things that you can try out to consume power. Having a high brightness of the screen does consume a lot of power. You can avoid this by dimming the screen when not needed, and also, it will protect your eyes.

How to calculate Watts Consumed by a Laptop?

Ultimately it all comes down to understanding some methods on how you can calculate the actual watts used by your laptop. Either you can determine approximately by knowing the laptop’s charger power consumption along with other factors as well. Or simply use an Electricity usage monitor to know the power consumed by your laptop.

In every laptop, you can easily make the approximate level of power your laptop consumes by taking into account the power used to charge your laptop (Adapter wattage.) Well, if you need a more accurate number, you may have to take other things involved as well.

As we spoke about the Acer Predator Laptop, it has a charging adapter that consumer 180 Watt power per hour. Apart from this, some of the main components that tend to increase the overall consumption are the CPU and GPU of the machine.

Well, in most of the systems you will easily find Intel processors and NVIDIA graphics cards, or even AMD. Either you can search on the official site for the power consumption these components take or you can open the back panel and take a look yourself just be 100% sure.

Mostly, the range of power consumption of a CPU is around 45W to 50W while for a GPU it is 75W to 80W. Overall, these two together increase the watts used by a laptop to over 10-15%, which is only on average and can go much higher depending on the type of components used.

Also, if we talk about the screen brightness, it ranges from 0.5W to 15W per hour with maximum brightness. These are some of the components taken into consideration while there are others as well such as the SSD/HDD, RAM., etc. Manually it may not be possible to get the exact figure but an approx value can be known for a basic idea.

Also, as we know, it uses about 60 watts of electricity, the equivalent of 0.06 kWh. This means that if a laptop is on for eight hours a day approximately, it will cost 6.76 cents a day to run the laptop (considering an average energy unit cost of 12 cents/kWh).

For a more accurate calculation, you can use an Electricity Usage Monitor. This device can be used over the power socket and tell you exactly the watts your laptop has been using during charging. It includes everything since all the power being consumed is coming from a single socket and the result is on the monitor within seconds.

You can use the device for other appliances at your home as well. It may not be necessary but curiosity makes you do unimaginable things.

To use it, simply stick the device on the wall socket and plug the charger into the device. It will start reading the amount of power your charger is drawing from the socket. Generally, it will show around 60W, which is the power that the charger has been built with.

Further, once the laptop is charged and the battery is full. You can now determine the power that the laptop is consuming from the battery towards its components. Also, this device is useful in calculating the total power consumed by the laptop in the period you have used it.

You can easily get this helpful device from e-commerce sites and grab it to know more about your laptop and other appliances as well.

Does a laptop consume less energy than a PC?

Well, there is no doubt about the fact that a laptop consumes less power than a PC since it has so many components put together. There are multiple types of laptops that consume more power than any basic laptop. So, let us see how many watts does a laptop use and what are factors depend on this.

Is the Laptop Wattage Differ for different brands such as Acer, Dell, ASUS, HP, etc?

It doesn’t matter what brand your laptop is from; whether it is from HP, Lenovo, DELL, ASUS, Acer, MSI, Razer Blade, etc., the watt usage rules remain the same. If the laptop has high specs, high GPU, then the consumption would be high. However, if two brands have a laptop with similar specs, the wattage won’t differ much.

The gaming laptop’s wattage is higher than the basic low-end machine. Because, it comes with a better quality display, higher graphics, adapter wattage is high too, high CPU, etc.

How many watts does a 15.6-inch laptop consume?

We tested the specifications of around 237 models and found out that, on average, most 15.6 inch laptops consume around 60 watts of power.

We tested the specs of around 171 different 17-inch models and found out that, on average, most laptops consume 90 watts!

To conclude, let us go through a summary of what we had discussed about the laptop’s power consumption. A laptop, when charge consumes 60W power in general while when in use it much more depends on the other components taken together.

It is better to use some device to know about the watts your laptops use rather than going for the manual process. The process involved may or may not give you an accurate result and may leave you confused. If you just need an idea, you can use your time and brain. But if you need proper results for some genuine purpose, make sure you use the Electricity Usage Monitor to get accurate results.

Otherwise, you can always let us know about your laptop’s power consumption and how you tried to save some power. 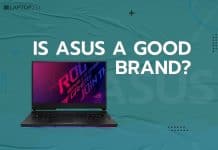 Is ASUS a Good Brand? [The Good, the Bad and the Ugly] 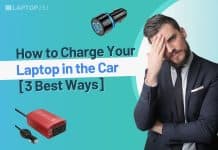 How to Charge Your Laptop in the Car [3 Best Ways] 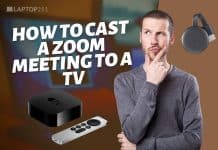 How to Cast a Zoom Meeting to a TV

Laptop721 offers tech product reviews, buyer's guides, and "best of" lists. Through our expertly researched articles, we help you find the right products for your personal needs. Laptop721.com is a participant in the Amazon Services LLC Associates Program, an affiliate advertising program designed to provide a means for sites to earn advertising fees by advertising and linking to Amazon.com.
Contact us: contact@laptop251.com

10 Best Laptops for 3D Modeling in 2022: According to 67 Professionals